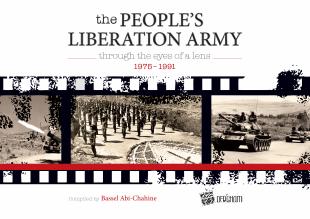 Through the eyes of a lens
Bassel Abi-Chahine

"Why this book? Although in my current life I have never been in a battlefield, fired a gun, or experienced the hardships of the Lebanese Civil War, yet the images of the PSP’s and PLA’s heroic moments have remained vivid in my thoughts and imagination, since my early years. This finedrawn yet strong sense of belonging to a community I have never actually lived in created the urge and motivation within me to seek and search for facts capable of capturing my flashbacks and unexplainable memories. After years of relentless pursuit and research, I was able to put the pieces together, and in the process I ended up with a valuable set of memorable and rare items. Through this compilation of historical images, I aspire to share and reflect my passion and respect for and deep appreciation of the PSP martyrs and fighters who fought with valor and conviction to protect the values of the Druze community during the Lebanese Civil War. Above all, I present this work as a special tribute to the martyr “Yousef Fouad al-Jawhary”, me in my previous life, who died at the young age of 16 from his injuries in February 26, 1984 in the West sector of Aley. He passed on to me all the memories I have in my present life."

To the reader, let the photographs take you on a journey of pride, to the times when young brave men took a firm stand to defend the Druze. The Druze community now proudly says, “We have prevailed, despite our modest arms and equipment, thanks to the determination, courage, conviction, and faith of these young men, and to the shrewd leadership of the PSP Leader Walid Beik Jumblatt."

Born in 1987, Bassel Abi-Chahine is a Freelance Illustrator. He studied Art Illustration, and holds a Bachelor’s Degree in Hotel Management. Although Bassel grew up abroad and is currently residing in Toronto Canada since 2002, he lived in Beirut for a couple of years. After his graduation, he followed the path of his passion, in several artistic fields including graphic design, historic illustrations, and pottery. His total interest in the PSP is an insatiable passion for its military mark in Lebanon’s Modern History (1975 –1991).