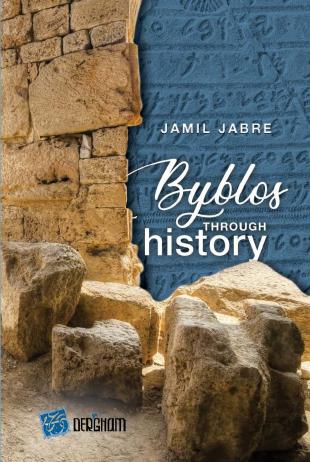 FOR YOUR ONLINE ORDERS (E-BOOK VERSION):

20% of the revenues of each sold book will go to
the Lebanese Red Cross to help Beirut.

"Byblos, the ancient city and wider region of the same name, boasts incomparable historical significance as a city and as a civilization, yet Byblos is rarely the subject of objective, scientific, comprehensive, and rigorous study to explore the evolution from the establishment seven thousand years ago to the present.

In fact, we surveyed the available literature and existing research in several languages, mainly in French. Some of these studies situated Byblos’ relics within their wider historical context. Others focused exclusively on the particularities of this city, such as the festivals and mythologies of Astarte and Adonis, or similarly, focused on the different Byblos cults. Still others focused on the relationship of Byblos with Pharaonic Egypt or Byblos as a cradle of the modern alphabet. Our survey revealed the absence of a complete chronological study.

This exhaustive study, based on the most authenticated historical documents and research in several languages, attempts to fill this gap in the literature. Byblos, like all other cities with ancient civilizations, especially the other Phoenician cities, underwent through several stages of prosperity and decadence."

Byblos through History was written by Jamil Jabre and initially published in Arabic (جبيل في التاريخ) in 2000. It was translated twenty years later into English.

Born in 1924 in Beit Chebab (Metn).
Diplomas:
BA in Political Sciences and Economy; BA in Arabic Literature; BA in Philosophy; Doctorate of State from Paris University.
Career:
Cultural activities:Participated in seminars of “Lebanese Friendship” headed by Charles Corm;  Founder-member of ”Pen-Club” (1951); Founded with Dr Constantin Zreik “Friends of the book”; Member of “North Metn Cultural Council”; Member of “Association of Political Sciences”; Member of “International PEN Club” (1958) ; Member of the “Cultural Exchange Association” between Lebanon and Italy.
Awards:
Knight, Arts and Letters – France (1964). Officer of Merit Order of the Italian Republic (1965). Honorary member of Sunland Academy (USA). Award for “After the storm” and “May fi hayatiha al modtariba” (1952). Awarded from the Lebanese cultural committee for his book “Al Adab Al loubnani abr al karat wal oussour”. Awarded from “Paris Broadcasting” (1962). Represented Lebanon with Fouad Ephrem Boustany, Michel Asmar, Ahmad Makki at the “Conference of Orient Studies” Italy (1964). Participated in several International PEN Club conferences lastly in 1995 in Greece. Accepted the invitation of the Cultural British Council in London University and Cambridge for Lectures (in French). Rotary Club District Metn named Jabre, Man of the year and awarded him the prestigious international Paul Harris Fellowship (2007). A ceremony on the honour of Dr Jamil Jabre on 29th May 2008 at the Press Syndicate.